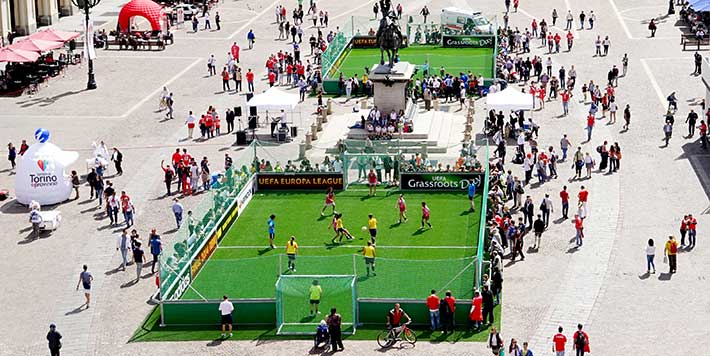 "Professional football is just the tip of the iceberg – the foundations are laid by the thousands upon thousands of kids who enjoy the game, play it and dream of becoming champions one day." Our mission is to help them fulfil their dream."

The 50-year-old also underlined the importance of the growth of women's football in parallel to the male game. "We are working in collaboration with UEFA on this," he said. "We are trying to take advantage of all the resources at our disposal, like the mini-pitches UEFA gave us [as part of the HatTrick assistance programme], to take football everywhere, especially to the most difficult areas of big Italian cities and women's football. We had some difficulty in Italy in this respect, but we are making up for it."

Inclusivity is the watchword. This morning Turin's Ferrante Aporti juvenile detention centre hosted a mini-tournament linked with the grassroots activities, as the FIGC seeks to engage young detainees, using football as an educational tool. They played under the banner 'nessuno escluso!' (nobody excluded!), which could easily apply to the FIGC's approach as a whole.